More on the Model: are Utilities Planning for the Future or Hoping it Doesn't Come? 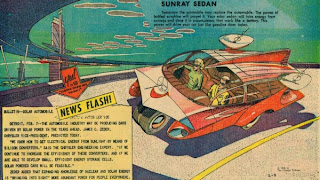 A few weeks ago I posted about threats to the traditional investor owned utility (IOU) business model and I'm still soaking in what EEI and others are saying. Since then, I:

I'm not a self proclaimed futurist, nor do I play one on TV or the Web. And I know if I was on a debate team, I could find plenty of arguments (e.g., low cost natgas, end of renewables subsidies, slow updake of EVs, etc.) for thinking it'll be business as usual for IOUs for decades to come.

But it's not just more renewables coming online over time, but also energy efficiency and increasingly advanced forms of demand management that are putting consistent downward pressure on the amount of electricity consumers are using in the US. And in the current pay plan, less electricity used equals less money flowing to utilities. Every year a little less. Eventually that's a lot less.

With my faux futurist cap on, am thinking on what that means for keeping the famously old and sagging infrastructure up and running, and of course trying to fund, achieve, demonstrate and maintain the higher levels of cybersecurity required these days in that increasingly strained environment.

No answers for now, just questions. But ones well worth pondering I suspect.

regardless of the futurists predictions the market and IOUs won't move fast enough. Either solar panels get so cheap and easy to install on roofs (one may happen, the other will always be specialized) that they take off as a means for tactical level community microgrids, or you wait for the stuff to take hold, it'll be a slow process in that case. Best bet is watch the retail cost of solar drop, then startup a firm for rooftop installation and private community smart grid solutions. But then if I'm thinking about it, it's already done.