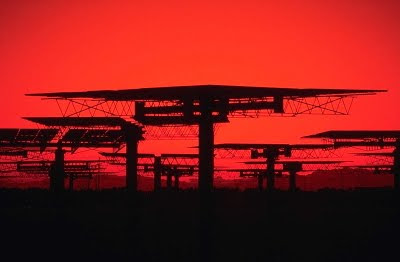 Frankly, after having worked in the security industry for ten years now, there are days when I feel like I've had my fill. At a recent Smart Grid conference I sometimes wished I could focus solely on cool new functionality like Vehicles to Grid (V2G) for instance.
But then I remember that what got me into energy was a passion for renewable technologies. A passion which was refreshed last week when by futurist Ray Kurzweil, speaking at MIT's Enterprise Forum, reminded us that solar energy technology is now on an exponential growth curve, just seven evolutionary steps away from reaching price/performance parity with the cheapest fossil fuels: coal.
Well guess what? If solar was ready for prime time today the grid couldn't handle it. Wouldn't that be depressing? We've got a few more years to get the grid ready by making it smarter, more flexible and able to handle the intermittent aspect of solar and wind.
So we need this Smart Grid to be up, running and well along its nation-wide implementation in the next 5-10 years. During this period, security consultancies like IOActive and Wurldtech will continue to tell us that the Smart Grid is a house of cards, ready to be blown over by casual hackers, let alone organized criminal gangs, non-state combatants, and nation states determined to harm the USA. There will be times when we'll second guess what we're doing, when we'll question whether NERC's vigilance and NIST's Smart Grid security standards are up to the task, whether key industry players are putting enough thought and effort into the security elements of their solutions, or are simply trying to sell us what was "secure enough" in the past.
Ultimately, the Smart Grid must both appear to be secure (so we continue to invest in and deploy it) and actually be secure, so it doesn't suffer a knock-out blow in its formative days. All this security stuff, while potentially tedious to some, is an acknowledgement that a secure Smart Grid is a mandatory prerequisite to our nation's energy future, nothing less.
Photo: Wikimedia Commons
Posted by Andy Bochman at 11:30 PM