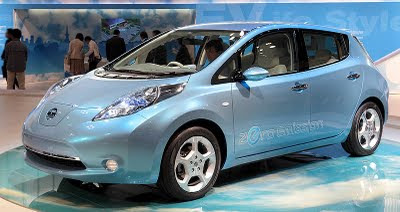 Initially arriving in the US in low volume in late 2010, the addition of thousands and later millions of cars with 5-10 KW battery packs drawing power from (and sometimes giving back to) the grid is cast as both a positive and a negative, depending on your point of view.

On the positive side, as this article says, high performance, deep cycle lithium ion and lithium air batteries en mass may be the energy storage solution the industry has been searching for. Here's an example starring Duke:


Sounds good, but others worry, here, that local electrical infrastructure can barely handle the additional iPods and iPhones it's had to deal with lately. Adding clusters of electric cars charging at approximately the same time each evening might break the camel's back in many neighborhoods. According to Peter Darbee, the CEO of Pacific Gas & Electric:


A high concentration of plug-in electric vehicles poses a serious challenge to utilities. Plug-in electric cars could draw electricity equivalent the amount needed to run one home, or up to three homes in certain places. You can see if you have three or five electric cars arrive in a neighborhood, you're going to overload the local circuits, and that will lead to blackouts. So we see it as an opportunity but we also see it as a challenge of significant proportions.


We all know how neighbors like to mimic and compete with each other (have you seen the Halloween decorations next door !?). One electric car will beget two will beget ten or twenty. Scheduling software will help, but much depends on fast this goes, and how close to edge local circuit gear is at the outset.