SGSB Hello from Boston the Day After 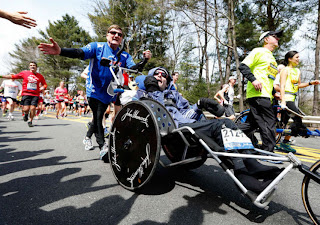 As long-time readers already know, I live in Boston, USA. More specifically, in a town called Brookline, about a mile from the historic baseball stadium named Fenway Park, and about 2 miles from the finish line of the Boston Marathon.

I ran it in 2004, in honor of turning 40, and it was one of the most profound experiences of my life ... certainly a top 10 moment. Since then I try to at least be on the sidelines and return the energy and support I received. The thousands of people who run the event and the charities connected to it, the hundreds of thousands who cheer the runners on, and the twenty-thousand plus runners from all over the world you run with and among, all add up to making you proud to be a living, breathing, happy, healthy, human being, sharing the world with other like-minded individuals.


I was out of town yesterday, visiting a son in another state. When the news broke of the attack on the marathon, I was in an airport waiting to fly home. Since then, other than hit "publish" on a post I already had written a few days ago, checking to see if any friends or family were hurt, and responding to numerous others checking on me (thanks!), I haven't been of much use.

The current Boston newspaper headline reads "Bombs Packed with Shrapnel".  The devices were pressure cookers packed with nails and ball bearings. We know this now because these are the materials being pulled out of the bodies of the victims.

Out of a 150 casualties, 3 have died so far, including one great little 8 year old boy who was on the sidelines cheering on his dad who was running. The boy's mother and sister were with him: his mom has brain injuries and his little sister lost a leg. Another mother in a suburb to the north has two sons who've lost a leg each so far.

I don't have anything constructive to say at present so I'll just shut up. I know madmen's bombs are taking innocent lives all over the world on a daily basis. This one hit very close to home. I would very much like to find this particular madman.