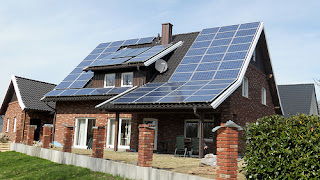 A week or so ago I posted about an EEI report warning that many if not most utilities are ill equipped to adapt to shifting business models arising from the build-out of distributed energy generation technologies.

In what some call a vicious cycle, the more technology allows customers to partially or fully remove their loads from the grid, the fewer payers there are to support the maintenance (let alone the modernization) of the grid's vast and aging infrastructure. I also asked readers to consider the implications for cybersecurity thinking and spending in the context of these types of mounting economic pressures.


Now I've got another article for you ...
this one is from Slate about Germany, land of the solar panel. And of the unexpected impacts pro-solar government policy has played, and what this all means to German (and US and global) utilities. Start here:


The proliferation of privately owned solar has large power companies in Germany worried. For two decades, they’ve been forced to facilitate and finance their competition, helping turn customers into producers.... Utility companies [were required] to plug all renewable power producers, down to the smallest rooftop solar panel, into the national grid and buy their power at a fixed, slightly above-market rate that guaranteed a modest return over the long term

The results of this policy, coupled with the increasing maturation of the enabling technologies, makes this intensity of this wave feel similar to recent industry-upending impacts of digital cameras on the century-old film photography business, and the many internet-triggered upheavals in media ... albeit perhaps in slower motion.

No country has invested in and incentivized solar the way Germany has. Consider this:

The southern German state of Bavaria, population 12.5 million, has three photovoltaic panels per resident, which adds up to more installed solar capacity than in the entire United States.

If and until practical grid-scale energy storage arrives, there's going to be pressure on the status quo models there:

... coal and nuclear plants—which can’t simply be switched on and off at will—must be kept running to guarantee a steady stream of electricity when the sun isn’t shining. That means overproduction of power during daylight hours, as the country’s ample solar energy floods onto the grid along with electricity produced by power plants. Power companies traditionally charge more during the day, when offices are full and manufacturing plants are in full swing, so the glut of daytime solar power reduces their profit.

And that's not the only source of pain:


The proliferation of solar panels on homes also takes high-margin residential customers off the grid at peak hours. And the energy surplus has driven prices for traditional coal and nuclear power down, even as renewables are still guaranteed more-than-competitive rates.


As power companies try to pass the costs to consumers in the form of higher bills, that just encourages more people to put solar panels on their roofs.

The full Slate article can be read HERE.

Other countries, including certain regions in the US, are heading in this direction, though at a more measured pace than Germany.  But still, until a new model emerges, threats to the economic viability of utilities are a threat to the grid and therefore national and regional energy security. We've got to figure this out proactively  not re-actively.