Is the Smart Grid Inducing Labor?

"The fight is never about grapes or lettuce. It is always about people."

It seems there's a wire crossing happening amid the hard-working folks who are helping create and manage the Smart Grid. In spite of positive initial reactions to federal investment in the creation of the Smart Grid, the law of unintended consequences is bringing some consternation among the ranks of organized labor as Smart Grid programs move from philosophy to reality.

While the introduction of the Smart Grid Investment Grant (SGIG) program was applauded by many in the labor community as the beginning of a new market for skilled technicians (see: this AFL-CIO blog post, or this IBEW promotional video), some actual deployments are not being greeted as favorably. 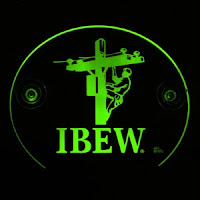 On January 19th, 2010, the Kennebec Journal reported that IBEW Local 1837 was "speaking out against" a new Smart Meter installation project by Central Maine Power (CMP). It was funded to the tune of $96M through the SGIG with a total cost of roughly $190M. Seems that the project would likely eliminate some 141 positions over time, and that did not sit well with the union.

The tensions at CMP, however, are not unique. In October, a plan by the board of Memphis Light, Gas and Water Division (MLGW) received similar criticism from the IBEW, which noted that roughly 400 meter reading jobs would be lost in that plan.

So how can there be such a disconnect?
The Smart Grid is comprised of much more than just smart metering. It involves redundancy, resiliency, and quality of power, and ease of integrating renewables and storage, and more. Today's unfortunate reality, however, it that investment has been overwhelming skewed to Smart Metering. Smart meters, and the improvements in automating, and "remotifying" the reading, turn-on, and cut-off of power, are seen as early wins. They do not appear to jeopardize the delivery of power, and can very quickly demonstrate cost efficiency by decreasing truck rolls. This is both a reaction to the government's emphasis on "shovel-ready" projects to fund, and to the ease with which a utility can justify projects to regulators as cost-savers, paying off capital costs in short order through reductions in labor costs. As a result, the union teams, originally anxious to generate skilled labor to drive the construction of the next generation of transmission and distribution, is left, instead, with a short-term need for installers who will be wiring up the elimination of hundreds of jobs for their meter reading brethren.

What to do?
One of the factors underlying the development of the Smart Grid is very much people-related. We have written of it here briefly in the past, but it deserves another shot. An aging workforce manages the existing Grid, and it is retiring at a rapid pace, even in this tough economy. In an article from April of 2008 in "Power" magazine, the percentage of retiring workers is pretty daunting:

When we then look to the remediative measures that folks are taking, we see impacts related to new technologies:

Rightly or wrongly, about 90 percent of utilities are looking to use new technologies to augment the diminishing staffing, while they continue to employ traditional staff supplementation techniques.

New Smart Grid technologies are creating a raft of new opportunities for a new generation of skilled labor. Whether it is the implementation and management of transmission and distribution technologies within utility infrastructure, as already looked to by the unions, or the creation of new skills and laborers to assist in residential, commercial, and public construction of power systems that will leverage these new capabilities, the opportunities are many.

Within the greater IBEW, there are already efforts underway to help to address this need, including the "National Utility Training Trust", reported on here in "The Electrical Worker", and it looks like they are moving forward to capitalize on the growth in the Smart Grid.

As we have written about previously in the areas of IT adoption and data usage, well-trained personnel are vital to the security of the infrastructure as it grows, and these new resources can integrate security considerations into their own interactions and behaviors with the Grid and its computational components. New workers have the opportunity to advance their careers, their marketability, and their value, with a focus on these additional skills.

This growth though, is not going to come for free. The Smart Grid and the market for power will benefit from this new wave of skilled professionals, but some of that market and advancement will need to be cost-justified through transitioning and reeducating existing personnel. I hope that as the Smart Grid grows, the labor pool increases to fuel it, and organizations such as the IBEW Local Chapters become champions of that change and growth ... not adversaries, who could introduce impediments that might hobble the same workers they seek to protect.